Fresh material after harvesting is unloaded into dosing belt conveyor LINE 808 (1) which consists of three small belt conveyors that move with different speeds and dose the material in controlled layer into the rest of the line. You can put up to 4m3 of material in dosing belt conveyor which gives wide autonomy in operation. With this belt conveyor in the line, you do not need to fill the material often in the line and it is done without the participation of labour. LINE 808 (1) doses the material through belt conveyors L 206 (2) and VARIO 404 (4) into primary selector BARABAN 1.0 (9) In this drum-shaped machine, chamomile material is separated in two fractions, good-quality and bad-quality material Good-quality product (chamomile flowers with out stems or with stems shorter than 8 cm) Bad-quality product (chamomile flowers with stems longer than 8 cm) Chamomile with short stems goes directly in drying facilities. Chamomile with long stems is transported by a belt conveyor (7) into the cutting machine S 350 (8). After cutting, the chamomile goes into the the box which is unloaded onto the dosing belt conveyor when it is full and is selected again in the drum separator. The capacity of the ranges from 700 kg/h up to 1000 kg/h. Primary processing in fresh condition is very important. This way, only good quality material is dried and energy is saved. Also, if the chamomile is well prepared, processing in dry condition is faster and more efficient.

Dry chamomile is input by loading bucket in dosing belt conveyor LINE 808 (1) which doses chamomile by itself in necessary layer in the rest of the line. In dosing belt conveyor you can put up to 4 m3 of material in one loading which gives wide authonomy in operation. With this belt conveyor in the line, you do not need to fill the material often in the line and it can be done without the participation of labor. Dosing belt conveyor consists of three connected belt conveyors and each one has its own electronic speed regulation. On the transition from the first to the second belt conveyor, there is a rotor for dispersion of chamomile. On the output from dosing belt conveyor (1) there is a stone catcher which is intended for removing bigger stones possibly found in chamomile. Belt conveyors (2) and (4) input chamomile from dosing belt conveyor (1) in vibration separator (5) which has two sieves and electronic regulation of oscillation frequency. Vibration separator (5) is meant for primary selection of chamomile, i.e. separating chamomile with long stems from chamomile with short stems. Bad quality flowers with long stems are transported by belt conveyor (7) in cutting machine for herbs (8). After cutting, chamomile is packed in boxes or bags and manually taken to belt conveyor (7) which takes the material to drum selector (13) which separates pure pollen from the mixture of small stems. Pure pollen goes through belt conveyor for packing(6) where it is packed in big bags. After vibration separator (5) good quality chamomile is transported by belt conveyor (3) in the machines for cutting the stems from picked and dried chamomile flowers (10). The machine(10) is equipped with the device for preventing the accumulation of chamomile in receiving hopper. Chamomile falls on control table (11) where visual inspection is done and it is additionally cleaned from impurities such as insects or parts of other herb species if there are any. This type of cleaning is done manually and the number of people involved in this phase depends on the level of impurities in chamomile. Before chamomile heads come to control table, they pass through airflow which separates empty flower heads and leaves of other herb species. After the control table, chamomile flower heads are packed in cardboard boxes through belt conveyor with changeable direction of movement (12) which is at the end of the control table. Flower heads are first input in one box, and when it is full, the PLC gives the command to belt conveyor to change the direction and fill the other box. The rest of the material from the machines for cutting the stems from picked and dried chamomile flowers (10), which is pollen, small stems, petals and part of empty chamomile heads goes on inclined belt conveyor (4) in drum selector where pure pollen is separated from the mixture of small stems. Pure pollen is packed in big bags through belt conveyor for packing(6). On the input in vibration separator with one sieve (5), on the output from control table (11) and packing machine(6) there are magnets which separate steel parts which can possibly be found in chamomile. The line produces three different output products as follows: 1. chamomile flowers (heads) without stems, 2. pure pollen, 3. small cut stems with petals and empty chamomile heads. The capacity of the line highly depends on the quality of picked chamomile, but you can expect the capacity that is around 100 kg/h of input material. The whole line is covered by the system for collecting floating dust which emerges during processing in certain points on the line. 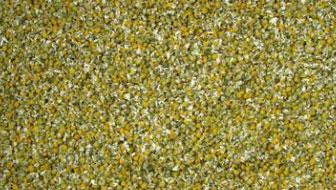 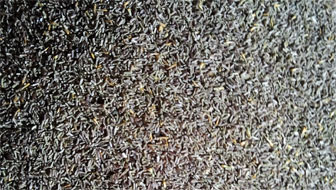